In the midst of Augustine's "Confessions" (ca. 400 CE) he complains of the difficulty in learning Greek and wrestling with the language of Homer and other Greek classics.


"I sinned, then, when as a boy I preferred those empty to those more profitable studies, or rather loved the one and hated the other. "One and one, two"; "two and two, four"; this was to me a hateful singsong: "the wooden horse lined with armed men," and "the burning of Troy," and "Creusa's shade and sad similitude," were the choice spectacle of my vanity. Why then did I hate the Greek classics, which have the like tales? For Homer also curiously wove the like fictions, and is most sweetly vain, yet was he bitter to my boyish taste. And so I suppose would Virgil be to Grecian children, when forced to learn him as I was Homer. Difficulty, in truth, the difficulty of a foreign tongue, dashed, as it were, with gall all the sweetness of Grecian fable. For not one word of it did I understand, and to make me understand I was urged vehemently with cruel threats and punishments." (Confessions 1.13-14)

Though he apparently was forced to read Greek and difficult classical texts, he notes that "not one word of it did I understand." Even threats and punishments did not help him in navigating a foreign tongue. Nevertheless, looking back in the maturity of his adult years, he now regrets that he did not spend more time studying and learning Greek and reading the classics.
Those of you who are either attempting to learn the elements of the Greek language, or (like myself) are doing their best to stay disciplined in reading the Greek New Testament every day and further advance their knowledge, take heart from Augustine, you will not regret studying Greek, but you may, later in your life, look back and regret that you had not stayed disciplined in your studies.

Hugh Houghton, in his monograph "Augustine's Text of John: Patristic Citations and Latin Gospel Manuscripts" (p. 23-24), brought attention to several quotations from the writings of Augustine that illustrate the sale of biblical manuscripts. (The following English translations are taken from Houghton's book)


"The Lord’s manuscripts are daily on sale, and readers read them; buy one for yourself and read it when you have time—in fact, make time for it: it is better to have time for this than for trifles." (Sermo 114B.15)

"Let someone complain, let him grumble, if this Scripture is not proclaimed and chanted throughout the world, if it should even stop being available to buy in public." (Enarratio in Psalmos 36.s1.2)

"Our writings reveal our religion to them, but we are not afraid. Our manuscripts are put on sale in public: the daylight does not blush for shame. Let them buy them, read them and believe them; or let them buy them, read them and laugh at them. Scripture knows how to call to account those who read and do not believe. A manuscript is carried around for sale, but the one whom its pages proclaim is not for sale...Buy a manuscript and read it: we are not ashamed." (Sermo 198.20)

These comments by Augustine are striking and indicate a flourishing time in North Africa when the scriptures were widely available and literacy was more wide spread than in previous centuries of the Roman imperial age.
For more fascinating insight into the production of books and manuscripts during this time, read Chapter 2 "The Use of the Bible and the Production of Books in the Time of Augustine" (p. 22-43) in Houghton's monograph. The chapter is filled with quotations from Augustine, Jerome and other contemporary figures that paint a picture of rich scholarship and free flow of ideas and books across the Mediterranean region during this time.

While reading through Hugh Houghton's new volume The Latin New Testament: A Guide to its History Early History, Texts, and Manuscripts (p.21), I came across an interesting quotation from Optatus of Milevis in North Africa (ca. mid 4th cen. CE);


“The libraries are filled with books. Nothing is wanting to the Church. In different places the divine praises are everywhere proclaimed. The mouths of the lectors keep not silence. The hands of all are full of volumes [of Scripture]. Nothing is lacking to the people who wish to be taught” (Contra Donat. 7.1)

It is fascinating to read Optatus' description of Church libraries in North Africa as "filled with books" and that the "hands of all are full of volumes." The abundant number of manuscripts available certainly speaks to the wealth of Christians in this area and the popularity of Christianity. There must have been a ready market for those who wished to study the scriptures for themselves. This comment also serves as a contrast to the generally low literacy rates in antiquity. Even though very few people could read, there were enough literates attending Churches that it warranted large collections of volumes. 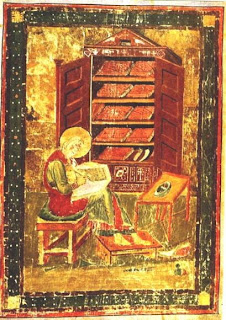