Family Π, Codex Alexandrinus, and a 4th Century Text of Mark

When I first began wading into the deep waters of textual criticism, any study of the later Medieval Greek manuscripts of the New Testament (those that are generally aligned with the Byzantine or Majority text) appeared less interesting. The earlier papyrus fragments, or the large ornate codices such as Vaticanus and Sinaiticus were certainly more glamorous and fascinating than the thousands of minuscule manuscripts that looked so similar to my untrained eye that they all blurred together. I think that I am not alone in my experience.

This view changed quickly after I was introduced to Amy Anderson’s research into Family 1. Here was a group of manuscripts, though late in date, which preserved a textual history that reached back into the early centuries of the Christian era. This is when I realized that there is a largely unexplored world of Byzantine manuscripts that have deep roots into the fertile soil of the transmission history of the New Testament.

As I began to learn more about the rich textual history imbedded in these Medieval Greek codices, I came across a group of related manuscripts that were discovered to have a unique textual character in a book from 1936; Silva Lake’s monograph "Family Π and the Codex Alexandrinus."According to Silva Lake, this group, Family Π, was first noticed by Wilhelm Bousset way back in 1894 in his work “Textkritische Studien zum Neuen Testament,” and was further examined by Hermann von Soden.

The significance of this group of manuscripts are their apparent connection with Codex Alexandrinus and with an even older archetype. Silva wrote;

“[T]he reconstructed text of Family Π, therefore, represents a manuscript older than the Codex Alexandrinus and affords another witness to a text which must have existed in the early part of the fifth century, if not before. Moreover, both the text of Family Π and the Codex Alexandrinus were elements in the formation of the Ecclesiastical text,--since it differs from each about equally and to the same extent that Π differs from A.”

It has yet to be explored further (to my knowledge), but von Soden also noted that Family Π’s text in Mark showed great similarities with the text used by Victor of Antioch in his commentary on Mark. If this proves to be true, then it is further confirmation that this unique text has roots into the late fourth century.

Jacob Geerlings further explored the history of this family in his 1962 work, “Family Π in Luke.” After considering the provenance of each codex, Geerlings concluded that the group originated from Mt. Athos, most likely the Laura Monastery. He surmised that Codex Π could have been gifted to the Laura Monastery when it was founded in 963 CE. The provenance of Codex Π before its presence on Mt. Athos is not as clear. However, Geerlings postulated that, because Codex Alexandrinus was probably copied in Constantinople at the Studios Monastery, Codex Π was likely produced there as well.

Since the time of these studies more codices have been discovered that show some connection to Family Π. Therefore, I hope to begin a fresh study, using the tools available today of this very interesting Family of Greek Bibles from Mt. Athos.
________________

Lake, Silva. Family II and the Codex Alexandrinus: The Text According to Mark. London: Christophers, 1936

I just received word that my paper proposal was accepted for the 2017 SBL Annual Meeting in Boston. For those who might be interested, it will be presented in the program unit; "Book History and Biblical Literatures." The title and abstract of the paper are,

Exposing Textual Corruption: Community as a Stabilizing Aspect in the Circulation of the New Testament writings during the Greco-Roman Era.

Very few manuscripts of the New Testament writings date to within the first three centuries of the Christian era. Because of this, William L. Petersen determined that, “Our critical editions do not present us with the text that was current in 150, 120 or 100—much less in 80 CE.” In contrast, Michel W. Holmes wrote that the New Testament text is “characterized by macro-level stability and micro-level fluidity.” Both of these scholars used a similar method, applying our knowledge of scribal transmission from later periods backward into the first century. Yet, each of their results were at opposite ends of the spectrum. Despite the disparity of these conclusions, there is another avenue that remains to be analyzed that governed the transmission of texts in the period under investigation; the publication and circulation conventions of the Roman imperial age.

This paper will set out the evidence for ancient publication through community transmission. It will consider examples from Cicero, Martial, Quintilian, Pliny the younger, and Galen. These authors reveal that, although they were familiar with and used commercial book dealers on occasion, they preferred to use social networks to circulate their writings. These same communities that copied and distributed an author’s compositions inadvertently created an environment in which significant alterations and plagiarizing of these same writings became known. Martial described this well when he wrote that “a well-known book cannot change its master” (Epig. 1.66). Through these networks Quintilian knew that some of his lectures had been crudely transcribed and were circulating amongst his followers (Inst. Or. Pref. 7-8). Pliny gives an example when he warned Octavius that draft versions of his poems had begun to circulate without Octavius’s consent (Ep. 2.10). Through the communities that circulated his writings, Galen learned that his original marginal note was mistakenly copied into the main body of text (In Hipp. epid. comm. III, 1.36).

Within the New Testament writings as a whole, this paper will examine Col 4:16, 1 Tim 4:13, and Rev 1:3, and in the Apostolic Fathers at, Poly. Phil. 13.2, 1 Clem. 47.1, Mart. Poly. 22.2, and Herm. Vis. 2.4. These examples portray early Christian publication practices as functioning primarily through social networks. As a result, any significant alterations to the New Testament writings were exposed in the wider community of the first and second centuries. This is evident in 2 Thess 2:1-2, where the author knew of falsely attributed letters. And in 2 Peter 3:16, where the author is aware that Paul’s epistles are being corrupted. In the second century, the textual alterations of Marcion and the Theodotians became widely known (Tertullian, Praescr. 38; Eusebius, Hist.eccl. 5.28).

The conclusion will be that because the New Testament writings were transmitted and circulated primarily through social contacts during the Greco-Roman era, this naturally produced a condition in which the plagiarizing and alteration of these books would have been exposed within these same community circles. This would have resulted in a moderately stable textual transmission during the first and second centuries. 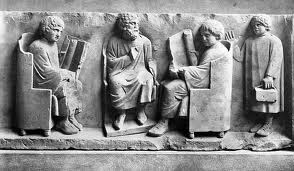