Review of; "James: A Commentary on the Greek Text" by William Varner 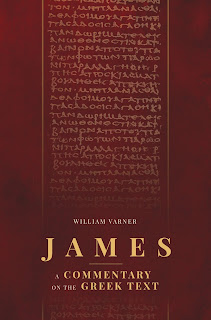 Dr. William C. Varner is Professor of Bible and Greek at “The Master’s College” and has published books, many academic journal articles, book chapters, and has written commentaries on the Greek text of the New Testament. His latest work is a new edition of his earlier commentary on the New Testament book of James. This new edition improves the previous edition which is no longer available in print (Forward, xv). Some of the improvements of this edition are his treatments of the new NA28 variant readings as well as references to the text of the Society of Biblical Literature Greek New Testament (SBLGNT), the Greek text of the NIV2011, and the new Tyndale House Greek New Testament (THGNT). Varner also references the new “Brill Dictionary of Ancient Greek” (GE), and, where relevant, the new Christian Standard Bible (CSB). For those who may own the earlier edition of his James commentary, these features, coupled with the affordable price, would alone justify purchasing this newly updated edition.


The main draw to this commentary is the originality of the work. Varner’s comments are focused and bolstered by a fresh examination of the Greek text in a top-down combination of the discourse level and sentence, phrase, and word syntax. Unlike some commentaries on the market, Varner’s work does not get bogged down in re-quoting, and re-treading the ground of previous commentaries (however useful this may be). The discussion revolves around the outline of James, which was determined by noting each place where a “cohesive device” was used. Varner wrote that James

“uses a cohesive device that cements his hortatory written discourse together much like a good preacher organizes and presents his material in a progressive manner by a coherent outline, sometimes with a repetitive device like alliteration. That cohesive device is his use of the direct address word “brothers” accompanied by either an imperative command or by a rhetorical question.” (pg. 38)

Each point on the outline is dealt with in the following manner. First the Greek text is quoted from the NA27 (cf. pg. 2). Then, if there are any textual issues these are discussed under the paragraph heading “Textual Notes.” Following this is a segment entitled “Sentence Flow and Translation” where a flowing translation is given and the text is indented to show sentence structure. Varner next gives any relevant historical background under the “Context” section. And finally, the bulk of the commentary is found under the heading of “Exegetical Comments,” where Varner brings a detailed discussion of each phrase and key word in the Greek. Throughout these subheadings Varner brings insight from the Old-Testament, Apostolic fathers, papyri, and other extra-biblical literature.


The only minor criticism that I have with the commentary has to do with some of the terminology used. Throughout the commentary Varner refers to “text-types,” such as “Alexandrian, Western, and ‘Majority,’ textual traditions” (pg. 3). The theory of text-types has largely been abandoned by most textual scholars, especially those at the INTF who produce the NA28 (see the relevant essays in the 2nd edition of “The Text of the New Testament in Contemporary Research: Essays on the Status Quaestionis”). However, this terminology is not prohibitive and may still be useful in referring to groups of similar manuscripts and does not detract from the excellent coverage of textual issues and transmission history of James.


Varner’s new commentary is an excellent resource for any scholar, pastor, student, or any others who may be working through the Greek text of James. And the cost of such a high quality work at only $19.95 means that “James: A Commentary on the Greek Text” is accessible to nearly everyone desiring a deeper understanding of James.
Posted by Timothy N. Mitchell at 10:49 PM No comments:

It is that time of year again, the Society of Biblical Literature Annual Meeting, this time, in Boston. For those who may be interested, I will be presenting a paper ("Exposing Textual Corruption") in the late afternoon session on Sunday, S19-308 SBL Book History and Biblical Literatures Section. I hope to see you there!

Posted by Timothy N. Mitchell at 10:38 PM No comments:

The Monks of Codex Sinaiticus

The grand Biblical manuscript, Codex Sinaiticus had an extremely long useful life (see previous post). It was manufactured around the middle of the 4th century and continued to be valued up to its modern "re-discovery" by Constantine von Tischendorf. Signs of its long useful life can be found in the margins of its parchment leaves. Several marginal notes scattered throughout the manuscript were written by readers and scribes of the codex.

The first group of notes were written sometime in the 12th century by a monk named Dionysius.

On the bottom left margin of Q39-f3r, under 1 Maccabees 1:9, reads a note (see image above). The following Greek transcription is taken from www.codexsinaiticus.org


On the bottom margin of Q66-f6r, under Song of Songs 3:5 reads another note that is simply Dionysius' name "διονυσιο(σ) (μον)αχ(οσ)" (Greek transcription is taken from www.codexsinaiticus.org).


The final note left by Dionysius is found on the bottom margin of Q66-f7r, under Song of Songs 6:3 reads in Greek (transcription taken from www.codexsinaiticus.org)

Another lengthy marginal note dating from around 1200 CE identifies a monk or scribe named Theophylact.

"The bestower of all wisdom, Son of God and Word, the incarnate Wisdom of the Father who teaches knowledge to man, instruct the sinner Theophylact to the glory of your name that he may do your will." (Parker, 118)


Though these marginal notes give sparse information about the scribes who wrote these entreaties to God, they reveal that the codex was still in use 850 years after its production.
________________________

Posted by Timothy N. Mitchell at 11:36 PM No comments:

Celsus on the Corruption of Scripture

Celsus was a pagan philosopher who flourished in the last half of the second century. He was a brilliant opponent of Christianity who had intimate knowledge of the Christian scriptures. Sometime around 180 CE he penned a refutation of the Christian religion, "On The True Doctrine." No known copies of this work survive in any manuscript, however, Origen (184-254 CE) preserves most of the work in his treatise against Celsus. “On The True Doctrine” is valuable as a window into the 2nd century Roman perspective of Christians.

Near the beginning of the work Celsus accused Christians of altering their scriptures in order to remove contradictions and difficult passages.


"It is clear to me that the writings of the Christians are a lie, and that your fables have not been well enough constructed to conceal this monstrous fiction. I have even heard that some of your interpreters, as if they had just come out of a tavern, are onto the inconsistencies and, pen in hand, alter the original writings three, four, and several more times over in order to be able to deny the contradictions in the face of criticism.” (On the True Doctrine, 3; Hoffmann, pg. 64)

It is difficult to determine exactly what circumstance Celsus is referring to, and he may be making an unfounded accusation in order to discredit their use of the scriptures. However, it may be that Celsus is making reference to Marcion and his alteration of the Pauline epistles and Luke.
At a couple of places in his treatise Celsus makes reference to the many differences and disputations between the various Christian communities. In the midst of a discussion about differing teachings about Jesus, he wrote that “some among the Christians—Marcion and his disciple Apelles for example — think that the creator is an inferior god,” and a little later, while talking about the many different sects in Christianity mentioned that some “call themselves Marcionites after their leader, Marcion” (On the True Doctrine, 6; Hoffmann, pg. 90-91).
For being an outsider, Celsus had incredible insight into the internecine conflict between the various groups within Christianity. It may be that Celsus was drawing a connection between a difference in doctrine and a deliberate alteration of Christian scriptural books. It is striking that Tertullian noted that;

"Corruption of the Scriptures and of their interpretation is to be expected wherever difference in doctrine is discovered. . . . Marcion openly and nakedly used the knife, not the pen, massacring Scripture to suit his own material.” (Prescript. 38)

It may be that Celsus, in accusing some Christians of altering their own scriptures, was referring to the widely known accusations against Marcion.

Donate to The Textual Mechanic's Scholarship