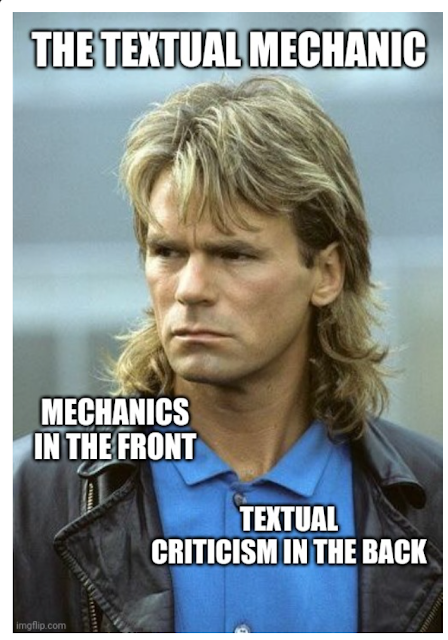 Posted by Timothy N. Mitchell at 3:47 PM No comments: 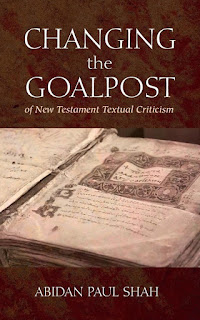 The last several decades have brought sweeping changes in the way that New Testament textual criticism has been traditionally practiced. The advent of ever more powerful computing technology allows scholars to process an increasing amount of textual data. Web based tools allow images of manuscripts to be viewed almost anywhere in the world, transcriptions can be made from these images and their texts compared all through the convenience of the internet.

A recently released book, Changing the Goalpost of New Testament Textual Criticism, argues that these advancements in technology and method have resulted in a shifting of the ultimate "goalpost" of the discipline away from discovering the "original text" (p. 1). This work is the published dissertation from Abidan Paul Shah's doctoral studies at the Southeastern Baptist Theological Seminary, Wake Forest, North Carolina where he earned his PhD.

This study contends that modern trends in textual criticism have shifted the goal of seeking an "original text" (p. 2). The book is divided into nine chapters that engage with scholars, trends and methods that are, in the author's eyes, instrumental in this change in goals.

Chapter one, the introduction, makes clear the premise for this study, that "historic Christianity" has at its foundation a "first-century text" (p 2). Shah argues that without this text (what he refers to as the "original text") no "authoritative text" exists and, consequently, "there is no longer any distinct Christian faith and practice" (p. 2).

Chapter two summarizes what is stated as the traditional goal of seeking out the "original text," which is defined as "the text that was penned by the author" (p. 10). This assertion is supported by briefly examining scholars who have declared this goal throughout the modern history of textual criticism.

Chapter three surveys the work of Bart Ehrman who, according to Shah, "has been the major challenger to the traditional goalpost in NTTC" (p. 28). The chapter focuses the bulk of its attention on Ehrman's The Orthodox Corruption of Scripture concluding that "Ehrman has popularized the new approach to the NT text more than any other proponent" (p.53).

Chapter four engages with David C. Parker's seminal work The Living Text of the Gospels. Shah argues that Parker "is a leading proponent of the new approach to the NT text, and is a well-known figure in the field of NTTC" (p. 54). He concludes that Parker's thesis "undermines the concept of a single original text" (p. 77).

Chapter five culls through Eldon J. Epp's publications in order to tease out his stance on textual criticism. After sifting through Epp's many essays it is noted that the most influential piece is his "The Multivalence of the Term ‘Original Text’ in New Testament Textual Criticism." It is surmised that his works are "repeatedly quoted in discussing the changing definition of the original text" (p. 102).

Chapter six presents the research of J. K. Elliott who, it is argued, is the most "vocal" critic of the traditional goals of textual criticism (p. 103-104). Shah highlights Elliott's shift in view, from being "optimistic" about recovering the "original text" (p. 104), to his lack of confidence in the "viability or necessity of trying to retrieve the original text of the NT" (p. 108).

Chapter seven looks at the most recent advancement in New Testament textual criticism, the Coherence Based Genealogical Method as developed and implemented by the INTF in Muenster. The CBGM is presented as complicit in shifting the goal of New Testament textual criticism from pursuing the "original text" to pursuing an "initial text" (p. 124). It is concluded that much of the problem with the CBGM "is the difficulty in comprehending its description by its proponents" (p. 125).

Chapter eight contains Shah's "Final Appeal and Critique" (p. 127), where he discusses and critiques four major premises of the new movement (p. 128). Among other criticisms, he argues that "proponents of the new approach in NTTC balk at any suggestion of inerrancy of the NT text" (p.159).

Chapter nine is the conclusion and final thoughts of Shah's work where he contends that Christian scholars need to affirm the traditional goals of New Testament textual criticism (p. 172). This is to be done in order to uphold the "traditional evangelical view of Scripture" (p. 172).

Those who come to Changing the Goalpost with the expectation that there would be a fresh and detailed discussion over the term "original text" will be disappointed. Chapter two does engage with some of the more recent objections to the pursuit of the "original text." Yet, a simple definition is given as the "traditional understanding of the original text, the text as penned by the original biblical author" (p. 11). Unfortunately, very little by way of a fresh explanation or interaction with primary source material is given in response to all of the modern objections.

Along with this, some of the interactions with scholarship might give the reader the mistaken impression that the goal was to hunt for juicy sounds bites. Of course, this would be a mistake and readers would do well to hear Shah's appeal.

Another small detail is that some of the incidental information in the book is incorrect in a few places and gives the impression that portions of it were written some time ago and have not been updated in the meantime. For example, David Parker is stated as being the "director of the Institute for the Textual Scholarship and Electronic Editing at the university’s theology and religion department" (p. 54). Of course, Parker has not been the director of ITSEE for some years and has been retired since 2017. Shah's work, however, is current in other facets such as in reference to the ECM in Acts which was published in 2017. Though this is a minor oversight, it does make one wonder if other less obvious but more important technical matters are out of date or incorrect.

Despite the above minor criticisms, the value in Changing the Goalpost is it's assembling of modern trends in New Testament textual criticism in a handy reference. Shah's work is useful as a history of recent developments in the discipline. It would work well as a text book alongside other standard introductions to New Testament textual criticism, in order to give a more detailed treatment of modern developments. Even though the tone is overall negative, it is interesting to see how each of the recent trends can be linked by a common problem. The abundant manuscript evidence for the Greek New Testament, with its highly contaminated textual tradition, has proved challenging for scholars. For some, it has led to an abandonment of any attempt at reconstructing an early or "original" text. For others, it has driven the development of innovative methods such as the CBGM that, despite its potential drawbacks, will serve to propel the discipline well into the twenty-first century and beyond.

Overall, Changing the Goalpost of New Testament Textual Criticism is a helpful engagement with modern trends. It will be especially instructive for those new to the field or to those who wish to better understand recent developments in the discipline.

Posted by Timothy N. Mitchell at 4:05 PM No comments: