In a recent issue of the Journal for the Study of the New Testament, Matthew Larsen of Yale University published an article,

"Accidental Publication, Unfinished Texts and the Traditional Goals of New Testament Textual Criticism." Journal for the Study of the New Testament 39.4 (2017): 362-387.


Larsen mines several primary sources from Roman, Greek, Christian, and Jewish authors from Cicero in the first century BCE to Augustine in the fifth century CE. Larsen concludes by writing,

“The varied assortment of examples from Jewish, Greek, Roman and late antique Christian contexts show the prevalence of textual ﬂuidity and unﬁnishedness in antiquity. Accidental publication, post-publication revision and multiple authorized versions of the same text are not surprising, since publication was only notional and so existed only as a social construct. Every new draft functions only provisionally and temporarily as a ﬁnal draft, while the notion of a truly ﬁnished text in a deﬁnitive version does not map neatly onto the material ‘realia’ of the ancient world.” (pg. 15) 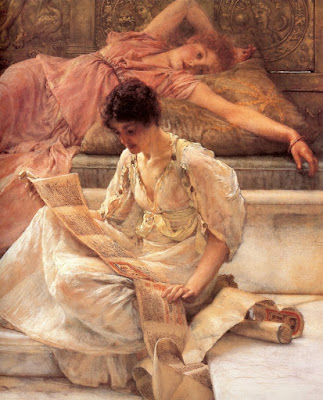 Larsen’s article advances our understanding of ancient composition and publication practices, by highlighting underutilized primary sources. Larsen does well to view the composition of the New Testament writings, especially the canonical gospels, as less rigidly defined texts on a sterilized linear progression from composition, to publication and wider circulation.

Yet, in several ways Larsen appears to misunderstand his own cited evidence. To give just one example, at one point Larsen cites Martial (late 1st cen. CE) as evidence for the ancient practice of compositions being plagiarized and repurposed by other authors as their own work. Larsen writes,

“In Martial, Ep. 1.66, he writes that, if you can buy a book for 6 or 10 sesterces, sure, go ahead and buy it, but if you ﬁnd one yet unpolished by the pumice-stone, yet unadorned with bosses and cover (i.e. unﬁnished and unpublished), buy it, because you can become the author of that kind of text. Unﬁnished and unpublished literary raw materials, Martial quipped, were worth more because one could author what someone else wrote.” (pg. 8)

This reference in Martial is a gem of insight into first century attitudes towards literary borrowing and plagiarism. That is, plagiarism was okay, as long as one could get away with using another author’s work and circulating it as their own. Nevertheless, Martial does qualify this practice of plagiarism, here is Martial’s epigram in full;

“You mistake, you greedy thief of my works, who think you can become a poet at no more than the cost of a transcript and a cheap papyrus roll. Applause is not acquired for six or ten sesterces. Look out for unpublished poems and unfinished studies, which one man only knows of, and which the sire of the virgin sheet not yet grown rough by the contact of hard chins, keeps sealed up in his book-wallet. A well-known book cannot change its author. But if there be one with ends not yet smoothed with pumice, and not yet smart with its bosses and wrapper, buy it: such I possess, and no man shall know. Whoever recites another man’s work, and so woos fame, ought not to buy a book, but—silence.” (Epigr. 1.66) (LCL, pg. 71)

It is clear from Martial’s epigram that Larsen is correct to view plagiarism and literary borrowing as an accepted first century practice, as long as one obtained raw notes that had not been circulated. Martial even admits to holding and using unpublished notes when he wrote that, “such I possess, and no man shall know.” Despite this, Larsen goes beyond the evidence by stating that “publication was only notional and so existed only as a social construct” (pg. 15). Martial testifies against Larsen’s thesis when he differentiated between a text that was kept private and unknown and a text that was published and circulating. A text that was published could not (easily) be plagiarized for “a well-known book cannot change its author,” in other words, once a book was published under an author’s name, someone else could not easily steal this author’s work without it becoming known. This consequence can be seen in the very same poem for Martial begins his epigram by accusing another poet of stealing his own work.

Some of the quotes referenced by Larsen are discussed with reference to the composition of the New Testament writings in,"What are the NT Autographs? An Examination of the Doctrine of Inspiration and Inerrancy in Light of Greco-Roman Publication." JETS 59/2 (June 2016): 287-308.

And in the forthcoming SBL paper,

Review of; "Grounded in the Faith," by Todd Scacewater 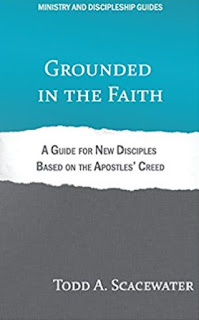 “Grounded in the Faith” is the first release in a planned series of discipleship booklets designed to foster learning and growth in new converts to the Christian faith. The author's preface reads; "This work is intended for pastors, elders, church leaders, and laymen to use to disciple new believers" (pg. v). The author, Todd Scacewater, holds a PhD from Westminster Theological Seminary in Pennsylvania, where he also taught Greek courses, and is the editor of the website “Exegetical Tools”[1] which features teaching resources for studying the Biblical languages.

“Grounded in the Faith” revolves around the author’s own English translation from the Greek text of the “Apostles’ Creed” found in most editions and commentaries. The booklet begins in the first chapter with a rudimentary orientation to the history of the creed and why it serves as an adequate summary of the basic tenets of Christian belief. Scacewater notes that the “final form of the Apostles’ Creed that churches around the world recite today was solidified by around AD 700” and that since it has been used “to teach new disciples for more than 1,600 years,” it can be accepted “as a true representation of the Bible’s teaching” (pg. 3). Those who desire a critical edition of the Greek text, or wish for an exhaustive historical treatment of the Creed should look elsewhere.

After the elementary introduction, the following chapters divide the creed into three main segments; “God the Father,” “Jesus Christ,” and “The Gifts of God.” Each of these chapters are further segmented into smaller portions that discuss each phrase of the Creed. For example, chapter one comments on the creedal phrase “I believe in God, the Father almighty, creator of heaven and earth” (pg.5). The phrase “I believe,” is given its own treatment in a mini-chapter and the rest of the saying receives commentary in a separate mini-chapter. Each of these mini-chapters ends with a series of questions that prompt the reader and the teacher into further discussion. For example, chapter one, under the mini-chapter “I believe,” the following questions conclude the discussion;


“1. Read Ephesians 2:8–9. How are we saved? 2. Read Galatians 2:16. Can we be saved through our own good works? 3. Read Ezekiel 36:26–27, which describes what happens when we are saved through faith in Christ. How is a new believer’s life different than before salvation? 4. How has God changed your heart since you started following Christ? How does your life look different?” (pg. 8)

The questions aid in solidifying the material and form a single unit of instruction. In this way a mentor or teacher could organize a discipleship program in which a mini-chapter was discussed at each session.

The final chapter, “Next Steps,” offers a simple but practical guide to encourage further spiritual growth, Church attendance, and biblical knowledge. It also gives suggestions for further reading on a few entry level works that deal with spiritual growth, biblical interpretation, defense of the Christian faith, and evangelism.

The booklet is designed to be used in a broad array of faith traditions and backgrounds and avoids points of interdenominational theological controversy. For example, when discussing a believer’s baptism into Christ a footnote states;


“The meaning and significance of baptism is understood differently by various theological traditions. Some traditions hold that only those who profess faith in Christ should be baptized, while other traditions baptize the babies of Christian families in order to include the entire family in the covenant community. Consult with your pastor to discuss the meaning and significance of baptism in your tradition and to answer any questions you may have.” (pg. 27-28)

With that said, the Reformed tradition of the author bleeds through at one point. In the first chapter, the essential aspect of faith in salvation is discussed and after quoting Ephesians 2:8-9, the author writes simply, “Faith, then, is a gift from God” (pg. 7). Christians from non-reformed traditions would contest this interpretation and argue that “salvation” and not “faith” is the gift in view here. Despite this, it is clear that the author emphasizes the necessity of personal faith in Christ; “But at the same time, faith is a personal decision that is made because of the gracious work of the Holy Spirit in our heart” (pg. 7). Therefore, even those who hold to “prevenient grace,” for example, would still benefit from this booklet.

Though this study guide is meant for a novice, one of the Greek and Hebrew names of God are introduced on one occasion. The significance of these two languages are introduced in a helpful way; “The Old Testament, written in ancient Hebrew, was translated into Greek by Jewish believers about 200 years before Jesus’ day” (pg. 15). Unfortunately, it is never explained that the New Testament and the “Apostles’ Creed” were also composed in Greek and the significance of the Greek words may be lost on a new convert. This information, however, can easily be supplemented by the instructor.

Overall, "Grounded in the Faith: A Guide for New Disciples Based on the Apostles’ Creed," is an excellent resource that is affordable and easily portable.

[1] www.http://exegeticaltools.com/
Posted by Timothy N. Mitchell at 5:35 PM No comments:

A news article popped up on my Facebook feed announcing that a new manuscript was discovered during renovations at Saint Catherine's Monastery, where Codex Sinaiticus was "discovered" by Tischendorf. The news source describes the find;

"Cairo- Egypt has announced the discovery of a rare manuscript dating back to the fifth or sixth century at the Saint Catherine Monastery in southern Sinai. Minister of Antiquities Khaled El-Enany said the manuscript was uncovered by monks during restoration works carried out at the monastery’s library. The minister highlighted the discovery’s importance, as it features medical texts written by the renowned Greek physician Hippocrates, along with three other texts by an anonymous writer."

Apparently the Hippocratic text is part of the underlying text of a Biblical palimpsest. The article describes the manuscript further on;

"Mohamed Abdel-Latif, assistant minister of antiquities for archaeological sites, explained that the discovered document is one of those known as "Palmesit" manuscripts, dating to the 6th century AD. The manuscript is written on vellum and bears parts of herbal remedies from a Greek recipe missing before 1200AD. He also noted that the second layer of the book features extracts from the Bible known as "Sinaitic manuscript" from the medieval eras."

I wonder if the 'anonymous write' could be Galen, a second century physician who wrote copious commentaries and notes on Hippocrates. It is also curious what manuscript is meant by the "Sinaitic manuscript" mentioned. 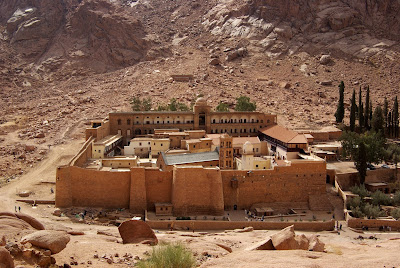