Galen and Papias on Forgery and Authorship

In a recent article in the Journal of Biblical Literature, Armin D. Baum published a response to Bart Ehrman's book, "Forgery and Counterforgery: The Use of Literary Deceit in Early Christian Polemics" (Oxford: Oxford University Press, 2012).

"Content and Form: Authorship Attribution and Pseudonymity in Ancient Speeches, Letters, Lectures, and Translations —A Rejoinder to Bart Ehrman," JBL 136.2 (2017): 381–403.

In this article Baum cites several ancient Christian and non-Christian Greco-Roman primary sources to support his thesis that,

In one interesting section, Baum discusses the Christian tradition that, even though Mark and Luke "composed" gospels that bore their names, Peter (for Mark) and Paul (for Luke), "were regarded as the intellectual authors of their contents (pg. 390)." Baum shows this attitude by siting the statements of Tertullian,


"That which Mark edited is stated to be Peter’s [Petri affirmetur], whose interpreter Mark was. Luke’s digest also they usually attribute to Paul [Paulo adscribere solent]. It is permissible for the works which disciples published to be regarded as belonging to their masters [Capit magistrorum videri quae discipuli promulgarint]." (Marc. 4.5.3–4)(Baum, pg. 390)

Another source not referenced by Baum support's this conclusion, Papias's (ca. 100-110 CE) statements on the composition of Mark.


"And the Elder used to say this: 'Mark, having become Peter's interpreter, wrote down accurately everything he remembered, though not in order, of the things either said or done by Christ. For he neither heard the Lord nor followed him, but afterward, as I said, followed Peter, who adapted his teachings as needed but had no intention of giving an ordered account of the Lord's sayings. Consequently Mark did nothing wrong in writing down some things as he remembered them, for he made it his one concern not omit anything which he heard or to make any false statement in them." (Eusebius, Hist. eccl. 3.39; Holmes, 569)

It is clear that, though Papias acknowledged that his gospel was composed and written down by Mark, he considered Peter as the true "intellectual author."
Galen (ca. 160s-170s CE), In the midst of analyzing the textual work and editions of two former Hippocratic scholars who were active in the first part of the second century, Galen wrote;


"A second book written in place of one formerly written is said to be revised (επιδιεσκευασθαι), when it has the same 'hypothesis'(υποθεσις) and most of the same words; some (of the words) taken out from the former work; some added; some altered. If you want an example of this for the sake of clarity, you have the second Autolycus of Eupolis revised from the former. Thus the doctors from Cnidus published the second 'Cnidian Opinions'in place of the former ones; some having the same in every way; but some added; some taken away; just as some altered. This then is the second book of Hippocrates which they say is more medical than the former." (Hipp. vict. acut. 120.5-14; Scherbenske's translation)

Though Galen is speaking specifically in reference to editing an ancient author's work, it is clear that Galen saw that a work was still considered to be that of the ancient authors as long as "some of the words" were still from the original author and that the editing did not alter the original ideas.
Thus, both Papias and Galen confirm Baum's conclusion that, 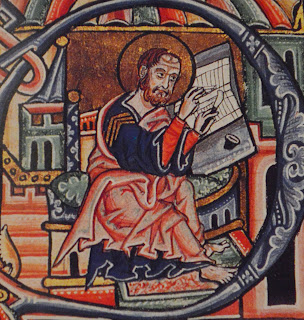 Codex Sinaiticus: A Hulking Pile of a Book

In a recent issue of "Expository Times," Christfried Böttrich of Greifswald University (Germany) published an article on the Codex Sinaiticus.


In this article, Böttrich contends that the library at Caesarea (T. C. Skeat), rather than Alexandria (Kirsopp Lake) was the likely source of the production of the manuscript. He gives the following reasons;


"First: there are some lexical indications regarding geographical substitutes. Second: Codex Sinaiticus adopts the Eusebian system in the gospels, and offers a special text division in Acts following a model that can be traced back to Pamphilus. Third: there are two famous colophons after the text of 2 Esdras and Esther claiming a correction of the text in Caesarea at least in the 6th century; such colophons should be viewed with caution because they became inflationary in later times, being copied from one codex to the other, but these two predate such secondary usurpation." (pg. 470)


Böttrich does not give any new evidence or argument for Caesarea as the likely place of origin. The bulk of the article focuses, rather, on the purpose for producing such a fine codex in the first place. He engages with the well known theory that both Codex Sinaiticus and Vaticanus were two of the large Biblical codices requested from Eusebius of Caesarea by the new Christian Emperor Constantine. Here is an excerpt of the request,

"Be ready therefore to act urgently on the decision which we have reached. It appeared proper to indicate to your Intelligence that you should order fifty volumes with ornamental leather bindings, easily legible and convenient for portable use, to be copied by skilled calligraphists well trained in the art, copies that is of the Divine Scriptures, the provision and use of which you well know to be necessary for reading in church. Written instructions have been sent by our Clemency to the man who is in charge of the diocese that he see to the supply of all the materials needed to produce them. The preparation of the written volumes with utmost speed shall be the task of your Diligence. You are entitled by the authority of this our letter to the use of two public vehicles for transportation. The fine copies may thus most readily be transported to us for inspection …" (Vit. Const 4.36.2–4; quoted from the article, pgs. 472-473).


Böttrich gives several reasons why Codex Sinaiticus was not one of these codices produced for public reading in a Church worship context. First is that the four column format with its many corrections cluttering the margins does not easily facilitate public reading (pg. 474). Second is the shear size of the book;

"The biggest problem is the weight. All in all, the codex originally must have covered more than 730 parchment sheets, a hulking pile. Who could carry it in daily use? Is it conceivable to manage liturgical readings with such a codex? Regarding the emperor’s guidelines, Codex Sinaiticus would not have been a clever solution." (pg. 474-475)

No one can argue that Sinaiticus is a very large codex and must have weighed a tremendous amount in its original complete form. Its size, however, may not exclude it from having been used in a Church worship context. There is at least one instance from about the same time period that mentions a Church congregation holding several large copies of the Bible. In the capital city of Cirta, Numidia, in North Africa, during the great persecution under Diocletion (ca. 303 CE), there is a detailed account of the confiscation of Bibles. In this account, a subdeacon surrenders to the officials a very large copy of the scriptures [codicem unum pernimium maiorem] and several church readers surrender "five large codices, and two small ones" [codices quinque maiores et minors duos] (Gamble, "Books and Readers," pgs. 145-147). Of course, the overall size of these copies are relative, and they still may be considerably smaller than Codex Sinaiticus. Even so, as this account suggests, it would not be out of place for a Christian congregation to use a larger copy of the Bible in their worship practices.

As Böttrich mentioned, Sinaiticus's four column layout is not unlike a bookroll from the height of the Roman Imperial era (pg. 474). This format, however, does not necessarily imply that Sinaiticus was not meant for public reading. As William Johnson noted, there were many who read out from bookrolls in group settings and were able to navigate its format. Johnson describes a scene in which the physician Galen (last half of the second century) and his rival Martialius publicly read from a bookroll and argued over its text (Johnson, "Reading and Reading Culture," pgs. 88-89). Johnson also recounts a dinner party scene described by Aulus Gellius (last half of the second century) where passages from poets were read out from bookrolls and discussed amongst the learned group (Johnson, pg. 105). Some of the formatting in Sinaticus also suggests that the codex had public reading in view. "Ekthesis" and other reading aids are used throughout the codex, and several places in the codex, the text is formatted into lists in such a way that the reading-out of these lists would emphasize each word in a unique way. Peter Head noted this in his paper "The Gospel of Mark in Codex Sinaiticus," stating that, "These lists would also have been reflected in public reading of the text of Sinaiticus, with each item pronounced carefully and separately, developing emphasis over the course of the lists" (pg. 13). I argue in my paper "Codex Sinaiticus as a Window into early Christian Worship," that these lists were read in a public worship setting in a unique way that facilitated learning or memorizing these words and phrases (pg. 12).

Böttrich's article is a nice summary of the scholarship and theories behind the production of arguably the world's most famous Biblical manuscript. He makes a great assessment that Caesarea is the likely origin of its production and that Sinaiticus is likely not one of the codices manufactured at Emperor Constantine's demand.

Posted by Timothy N. Mitchell at 9:20 PM No comments: