Three Avenues of Publication in the Roman Era

Sometime at the end of the first or beginning of the second century CE (AD), the Roman statesman Pliny the Younger wrote to Suetonius urging him to publish his work. In this exhortation Pliny succinctly describes the three avenues available to authors who wished to release their work for circulation and copying.


"The work is finished and perfect, further polish will not make it shinier but wear it out. Let me see your work completed with a title tag, let me hear that the volumes of my [Suetonius] Tranquillus are copied, read, and sold." (Ep. 5.10)

Pliny mentions three pathways to publication; copying, most likely a reference to the distribution of a writing through the authors social contacts; reading, an allusion to the public reading of a text at diner parties, recitations, and other social gatherings; selling, a direct mention of book sellers. Each of these methods of "releasing" a composition effectively "published" the work for general consumption. The author lost control of the work's fate and it was free to circulate and be distributed by demand (see previous posts on publication, here, and here).

In Christian communities, at least in the first few centuries, it seems that the primary means by which the New Testament writings were disseminated was through private circulation and copying and public reading. Paul alludes to both of these avenues of distribution at the end of his letter to the Colossians.


"And when this letter has been read among you, have it also read in the church of the Laodiceans; and see that you also read the letter from Laodicea." (Col. 4:16; ESV)

In this passage, Paul is directing the Church at Colossae to both publicly read out his letters, but also to copy and disseminate those letters addressed to other communities circulating throughout the Churches in the region.

Though direct evidence for the public sale of New Testament writings does not appear until the fourth century (see previous post), there are allusions to the possibility of scripture being sold as early as the second century. At around 150 CE Justin Martyr wrote to a Jewish acquaintance named Trypho arguing for the truthfulness of Christianity. Throughout the dialogue Justin records some of Trypho's objections and arguments against Christianity. In one instance Trypho is recorded as saying;


"Moreover, I am aware that your precepts in the so-called Gospel are so wonderful and so great, that I suspect no one can keep them; for I have carefully read them." (Dial. 10)

Besides the interesting use of the word "Gospel" to refer to a group of Christian writings, Trypho declares that he has read them. How did Trypho obtain a copy of these Gospels? At first glance it seems the likely answer is that Justin loaned Trypho copies for him to read. But Trypho informed Justin of his reading of the Gospels in such a way that suggests Trypho obtain copies on his own accord. It is of course possible that Trypho acquired copies through private channels. The other possibility is that Trypho purchased copies through a Book Dealer.

Another allusion to the sale of New Testament writings occurs in the writings of Celsus which are preserved in the work of Origen. Celsus was a Greek Philosopher opposed to Christianity and wrote an anti-Christian treatise entitled "The True Word" in the last half of the second century (ca. 160-180 CE). It was 70-80 years later before a solid Christian rebuttal came on the scene. Origen wrote a lengthy response entitled simply "Contra Celsum" where he quoted, paraphrased, and alluded to Celsus' work. Throughout Origen makes mention of Celsus' use of Gospels material. In one place Origen mentioned that Celsus "makes numerous quotations from the Gospel according to Matthew" (1.34). In another Origen wrote;


"But if this Celsus, who, in order to find matter of accusation against Jesus and the Christians, extracts from the Gospel even passages which are incorrectly interpreted, but passes over in silence the evidences of the divinity of Jesus, would listen to divine portents, let him read the Gospel, and see that even the centurion, and they who with him kept watch over Jesus, on seeing the earthquake, and the events that occurred, were greatly afraid, saying, "This man was the son of God." (Cels. 2.36)

It is clear from these passages that Celsus was at the very least reading the Gospels of Matthew and John. Again, where was Celsus able to acquire copies of these Christian writings? It is possible that he had direct contact with Christian communities in the second century and obtained copies through private channels. Another (likely) possibility is that Celsus gathered copies of the New Testament writings by purchasing them from a Book Seller.

Either through private channels or through commercial Book Sellers, it is apparent that by the middle of the second century (and most likely much earlier) the New Testament writings were distributed to such a degree that non Christians could obtain copies and engage with the Christian faith. 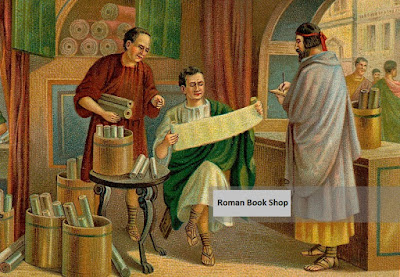 Some of the earliest copies of the New Testament writings were copied in such a way that they aided the reader in their task of deciphering the scriptio continua. Bookrolls from the Roman world (1st -3rd century CE) which contained works of literature had very little by way of assistance for the reader. Take for example P. Lond. Lit. 134 (ca. 200 CE), a copy of  Hyperides, In Philippidem. It has a steady stream of letters uninterrupted by spaces or any type of punctuation.

Those fortunate children in antiquity with access to an education had to be taught methods of deciphering this system of writing. Grammarians (ancient teachers) facilitated this instruction by creating models of ancient works such as Homer's Iliad that incorporated spaces between words and markings differentiating syllables and sense units. One example of a teacher's model is a wooden tablet from Roman Egypt that contains Homer's Iliad (3rd century). The wooden slate uses spaces between words and markings to assist beginning readers in comprehending the text.

Similar phenomena of reading aid can be detected in some early copies of New Testament writings. For example, spaces between words can clearly be seen throughout P46 (2nd/3rd century), a collection of Paul's epistles.


Spaces and limited punctuation can be seen in P66 (2nd/3rd century), a copy of John's Gospel.

There are some interesting parallels between early New Testament manuscripts such as P46 and P66 and teachers models such as AM 13839. Both types of documents employ clear and legible scripts, give generous space between lines, and use spacing between words and sense units. These features have been highlighted elsewhere on this blog (here, and here). It has already been noted that reading aids seem to reveal that these Christian books were produced for less than capable readers.
Coupled with this, perhaps the presence of reader's aids in copies of New Testament manuscripts also reveal another parallel with teacher's models; that of instruction. Just like teacher's models were used almost exclusively in the context of learning, perhaps these Christian manuscripts were produced so that they could be used primarily within teaching contexts.
_____________________

Johnson, William A., Bookrolls and Scribes in Oxyrhynchus. Toronto: University of Toronto Press, 2004.