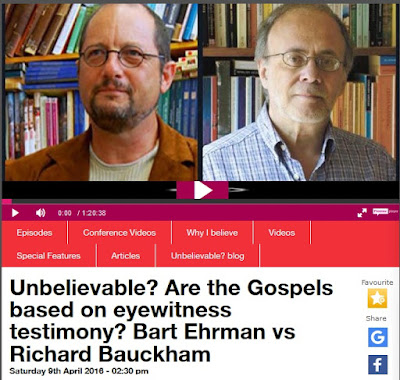 Recently, the radio show "Unbelievable" aired a debate between noted New Testament scholars Bart Ehrman and Richard Bauckham. The debate centered around Ehrman's new book "Jesus Before the Gospels" where Ehrman contends that the stories about Jesus were circulated, altered, and invented by the followers of Jesus before they were written down. Bauckham, provides a counter-argument, where, in his book "Jesus and the Eyewitnesses," he has argued that the Gospels were written within "living memory" of those eyewitnesses of Jesus' ministry and these Gospels are based upon this testimony.
During this spirited discussion Ehrman mentions the second century Church figure Justin Martyr (140's CE) who makes reference throughout his writings to the "memoirs of the apostles." In regard to this, at 48:43, Ehrman states that  "he doesn't call them by our Gospels. . . the only memoir he names is the memoirs of Peter. . . he's talking about the Gospel of Peter."
The reference that Ehrman is referring to is Justin Martyr's comments in his Dialogue with Trypho;


Justin is referring to the memoirs of Peter and he is loosely quoting an incident recorded in this "memoir." That Jesus changed the name of an apostle to Peter and the names of two others to "Boanerges." In all of the Gospels, this account can only be found in the Gospel of Mark at 3:16-17;


No where in the Gospel of Peter is this account of the naming of Peter and the sons of Zebedee mentioned (Hill, 133-134). Therefore, contrary to Ehrman's claims, Justin Martyr can only be referring to the Gospel of Mark and here he connects it to Peter, independently verifying Papias' famous comments on the origins of Mark's Gospel;


"And the Elder used to say this: 'Mark, having become Peter's interpreter, wrote down accurately everything he remembered, though not in order, of the things either said or done by Christ. For he neither heard the Lord nor followed him, but afterward, as I said, followed Peter, who adapted his teachings as needed but had no intention of giving an ordered account of the Lord's sayings. Consequently Mark did nothing wrong in writing down some things as he remembered them, for he made it his one concern not omit anything which he heard or to make any false statement in them." (Eusebius Hist. eccl. 3.39; Holmes, 569)


Here are at least two independent sources, one from the late first century (Papias) and one from  mid second century (Justin Martyr) that point to a common understanding in the early Church; that the Gospel of Mark was sourced in the testimony of the apostle Peter.

The Staurogram and The Epistle of Barnabas: Further Discussion

In a previous post, the comments of Dr. Brent Nongbri in reference to the staurogram and its place in a third century manuscript were taken up. At issue is whether Christian scribes of the second and third centuries were experimenting with images of Jesus on the cross in their art and worship practices. Dr. Nonbgri argued that,


"At the very least, such experimentation with cruciform imagery [in the staurogram] would appear less out of place in the fourth century than in the late second or early third century. (pg. 33-34)"

These observations are striking when looking at the many references in early Christian writings of the second and third century; Minucius Felix, Tertullian, Clement of Alexandria, and the author of the Epistle of Barnabas. These authors mention the cross and cross shapes as venerated symbols of Christian identity. Yet, it is argued by Nongbri, each of these early Christian examples are merely allusions to the cross and its shape and not to the image of the crucified Jesus, which scholars purport the staurogram to be.
There was an oft repeated story in early Christian literature that may serve to illustrate that the image of Jesus as a crucified figure on the cross was a familiar Christian icon. In the Epistle of Barnabas, reference is made to to the story of Israel defeating the armies of Amalek in Exodus 17:8-13. In this account, Moses lifted up his hands as a sign to the Lord; when his hands were held aloft, Israel was victorious, when his hands fell to his side, Amalek was victorious. Aaron and Hur eventually held Moses' hands aloft as he grew weary and the Israelites won the battle. In light of this story, the Epistle of Barnabas (70-135 CE) wrote;


"Once again you have a reference about the cross and about him who was destined to be crucified. And again he speaks to Moses, when war was being waged against Israel by foreigners, and in order that he might remind those being attacked that they had been handed over to death because of their sins, the Spirit says to the heart of Moses that he should make a symbol of the cross and of him who was destined to suffer because, he is saying, unless they place their hope in him, war shall be waged against them forever. Therefore Moses piled one shield upon another in the midst of the battle, and standing high above them all he stretched out his hands, and so Israel was again victorious. But whenever he lowered them, the men began to be killed. Why so? So that they might learn that they cannot be saved unless they place their hope in him. (12:1-3)"

There are some aspects of this story that bear reflection. First, the Epistle of Barnabas assumes that Moses raised his hands horizontally, in the shape of the cross, and this is mentioned in such a way that this must have been a familiar Christian interpretation of this story. And second, the Epistle of Barnabas specifically references this as a symbol of the crucified Jesus and not just of the cross. At one point Barnabas uses the word "suffer" (πασχειν) (12:2) and the middle/passive infinitive (σταυρουσθαι) to refer to this event as a reference to Jesus (12:1). It is clear that Barnabas was viewing the imagery of Moses standing with arms outstretched as a visual representation of Jesus suffering on the cross. This story in Barnabas is set in the midst of several allegorical references to the cross that were found in the familiar passages and stories of the Old Testament. At Barnabas 8:1,5; 9:7; 11:1,8; and 13:5. In each of these other references the cross is mentioned as a stand alone representation of salvation with no visualization of the crucified Jesus. However, at 12:1-3, specific mention is made to the imagery of Moses with outstretched hands as a visual representation of the suffering Jesus on the cross.
Though, there is no specific reference to scribes taking this iconography and creating a staurogram, the impetus for doing so is already present in Barnabas some 80-100 years before it is found, represented by the staurogram, in the texts of P66, P45, and P75. The reverence for Jesus and the cross was already tied to a textual representation in the nomina sacra at Barn. 9:7-8. It takes no stretch of the imagination to conclude that a visual representation of Jesus on the cross, as found at Barn. 12:1-3, would find expression in a staurogram.

Nongbri, Brent. “The Limits of Palaeographic Dating of Literary Papyri: Some Observations on the Date and Provenance of P. Bodmer II (P66),” Museum Helveticum 71 (2014): 1-35.
Posted by Timothy N. Mitchell at 9:30 AM 2 comments: