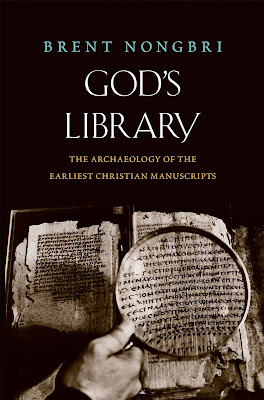 In recent years, the study of “Christian” manuscripts as cultural artifacts has been gaining traction in the academic world. The binding, the textual formatting, aids to the reader, and other aspects of these manuscripts are being studied by researchers in order to better understand the cultural milieus in which these documents were produced and used.

Brent Nongbri is Honorary Research Fellow at Macquarie University in Sydney, Australia, and his new book, "God’s Library," is a timely contribution to this trend of studying manuscripts as ancient artifacts. Nongbri writes, “the overall effect of my research is to raise consciousness about how messy and fragmentary our knowledge about these books is” (p. 14-15).

This review begins with a detailed summary for each chapter, for the benefit of those who have not read the book and are considering a purchase. This is followed by an evaluation of a few of the central arguments posited in the work.

The first chapter, “The Early Christian Book,” does a great job at introducing the unfamiliar reader to the materials used in making ancient books (either papyrus or animal skins, p. 24-27), along with the inks used in writing the text (p. 26), though more thorough treatments can be found in other handbooks. Where this chapter shines is in the overview of the various kinds of binding and quire gatherings used in stitching codices (p. 27-36), the various extant covers (p. 38-40), and the ancient repairing of codices (p. 40-41). Nongbri makes sure to note that the differences in codex construction, the style of stitching, the use of single or multi-quires, “do not, however, have any bearing on the dates of our surviving copies” (p. 36).

The various methods used in dating ancient manuscripts is discussed in chapter two, “The Dating Game” (p. 47-82). Nongbri introduces the reader to the methods palaeographers use to establish the dates of undated literary manuscripts and highlights several problems with the discipline (p. 49-72). The use of “Radiocarbon analysis” to determine the date of manuscripts is evaluated and several problems with the technique are discussed (p. 72-80). Methods of “Ink Analysis” are examined and the case of the “Gospel of Judas” (Codex Tchacos) is brought to bear as evidence of difficulties with the method (p. 80-82). At the end of the chapter Nongbri warns the reader that “if you see reports of dates like ‘circa 150 CE’ or ‘about the year 200’ in reference to an early Christian manuscript, you should be very suspicious” (p. 82).

The Following two chapters analyze the two most famous early Christian manuscript collections; chapter four “A Discovery ‘Which Threw All Others in the Shade’: The Beatty Biblical Papyri” (p. 116-156), and, the longest chapter in the book, chapter five “An Elusive Collection: The Bodmer Papyri” (p. 157-215). Tapping into the findings of his own archival research, Nongbri attempts to correct misinformation surrounding these famous book collections.

The generally accepted dates of several of the codices in these collections are re-examined and challenged. The Beatty Codex VI (Number, Deuteronomy) is generally thought to be the oldest manuscript in the collection (ca. 150 CE) Nongbri (citing E. G. Turner) opts for a date range of 2nd to 3rd century, stating that “Greater precision on the basis of paleography alone is simply not possible” (p. 150). The date assigned to Beatty Codex I (P45), which has recently been re-evaluated as belonging to the 3rd century by Orsini and Clarysse, is also questioned. This is because, it is argued, “our corpus of dateable samples is taken almost entirely from rolls, and our concern here is a codex. The unstated working assumption is that the dateable rolls give a full representation of the span of time this type of writing was in use, even though the roll format was largely supplanted by the codex by the end of the fourth century” (p. 138). Though Beatty Codex II (P46) has been recently dated to 200-225 CE, Nongbri contends that “no truly compelling securely dated parallels for the script of the Pauline Epistles codex have been proposed” (p. 144).

Referring now to the Bodmer collection, it is argued “that the antiquity of P.Bodmer II [P66] has been exaggerated” (p. 199). This conclusion is supported mainly by the similarity in appearance of P.Bodmer II to P.Bodmer XX and Schøyen MS 193 (a codex believed to be originally part of the ancient collection), both in the squarish shape and general appearance of script (p. 199). Nongbri also contends for a fourth century date for P. Bodmer XIV-XV (P75) by comparing the elongated codex shape (width half the height) and construction with other fourth century codices in the Bodmer collection and the Nag Hammadi Codices (p. 199-202). Along with codicology, Nongbri appeals to the broadly similar appearance of the scripts with two securely dated letters from the fourth century, P.Herm 4 and 5 (p. 202).

Chapter six, “Excavating Christian Litter and Literature at Oxyrhynchus,” introduces the history of the late 19th and early 20th century expeditions to Oxyrhynchus, Egypt by Bernard P. Grenfell and Arthur S. Hunt (p. 216-246). Personal correspondence, contemporary news reports and magazine articles are brought to bear. The chapter lists out all the Christian papyri discovered at Oxyrhynchus according to genre and frequency of pieces found and the dates assigned to them (p. 231-233). Nongbri observes that there is a notable decrease in the number of papyri from the third to the fourth centuries, which, according to him, seems at odds with the rise in power of the Christian Emperor Constantine in the early fourth century (p. 244). He surmises that this may indicate that the dates assigned to the “New Testament” material are being artificially “pulled early” (p. 245) When the texts of undated literary Christian codices are compared with these securely dated re-used rolls, it results in an artificially early date (p. 244-245).

In the final chapter, “Fabricating a Second-Century Codex of the Four Gospels,” Nongbri recounts the history of the New Testament fragments P64+P67+P4. The story begins with the “discovery” of a Philo codex allegedly found bricked up in a wall (p. 248). The codex was thought to have been placed there in hiding during the “Diocletianic persecutions” in 292 CE (p. 249). Fragments of a papyrus codex containing Luke were found with the Philo codex, commonly known as P4 (p. 249). Because it was thought that the Lukan fragments were part of the binding cartonnage of the Philo codex, then P4 must date before (likely sometime earlier) than the late third century (p. 249). When fragments of Matthew (P64, P67) were thought to originate from the same codex, Colin H. Roberts postulated these as evidence of a second century four Gospel codex (p. 254).

Through his own archival research, Nongbri discovered that the (allegedly) securely dated Philo codex was not necessarily recovered in the wall of a house in Koptos Egypt. Rather, the information likely (Nongbri surmises) came from a local antiquities dealer after it was bought on the market and thus its provenance is unknown (p. 262). Thus, the date of the Lukan fragments (P4) are not as secure as once thought and this throws the entire second century four Gospel codex theory into doubt (p. 263-267). Based on the use of ekthesis in these Gospel fragments, Nongbri postulated that they should be dated closer to the fourth century where “similar techniques of division of the text are known to occur in manuscripts generally assigned to the fourth and fifth centuries” (p. 267).

Though Nongbri’s extreme caution towards dating manuscripts too early and with an unrealistically narrow range is appropriate in the specific cases he examines, at times his suspicion comes across as overdone. In several places this skepticism undercuts his own attempts at assigning later dates to some of the manuscripts discussed.

In the first chapter, “The Early Christian Book,” he argues that the differences in codex construction, the style of stitching, the use of single or multi-quires, “do not, however, have any bearing on the dates of our surviving copies” (p. 36). He writes that,


The variety of construction techniques of surviving codices from Egypt suggests that the rise and spread of the codex format was a drawn-out process involving both diffusion of the technology from one locality to another and independent experimentation at the local level. Refinement of construction techniques at any given time would have varied widely from place to place. (p. 36)

Yet, at several places in the book Nongbri appeals to codicology as a gauge of date (cf. p. 80). For example, when suggesting that the antiquity of P. Bodmer II (P66) has been exaggerated, Nongbri highlights the similarity of the squarish shape and the construction of P. Bodmer II with the squarish shape and similarity in binding of other fourth century codices in the collection (p. 195-199). If codicology has no “bearing on the dates” then the similarity in shape and binding between the Bodmer papyri should not be marshalled as evidence of a later date for P. Bodmer II or any other undated manuscripts (see also p. 202-206, et al.).

Nongbri helpfully distills dating by palaeography down to its primary assumption that “Graphic similarity equates to temporal similarity,” and this comparison is best made against securely dated writings samples rather than against other non-securely dated examples (p. 57-58). In the second chapter, Nongbri expresses skepticism towards dating strictly by palaeography, listing out reasons that “challenge the key assumption I mentioned at the outset—that graphic similarity necessarily equates to chronological similarity” (p. 64). In a later footnote, when discussing whether palaeography is strictly a “science,” Nongbri writes, “What is more certain in terms of social history is that the modern academic discipline of palaeography emerged out of the aesthetic interests and connoisseurship of elite circles in the eighteenth and nineteenth centuries” (p. 296, note 20).

If palaeography, however, is merely a product of eighteenth and nineteenth centuries’ anachronistically applying different classifications to ancient scripts, then scholars cannot use palaeography to assign dates to undated manuscripts. It appears that Nongbri intends to bring this point home throughout the book, yet he consistently uses the graphic similarity between scripts as a criterion for assigning later dates to “Biblical” manuscripts (cf. p. 202).

Despite these glaring problems, there is much to like about this book. The Prologue (if one reads Prologues), is well written and draws the reader into the book. The work is supported by extensive archival research that is both illuminating and, in the case of some manuscripts and ancient collections, paradigm shifting. The footnotes and bibliography are extensive which will likely make this book the standard guide for future studies in the provenance of manuscripts and collections. There are plenty of maps, diagrams, charts, and images of manuscripts that aid the reader in navigating the often times unfamiliar locations and visualizing these ancient books as artifacts.

Finally, much of the skepticism and warnings of overconfidence in dating ancient manuscripts is appropriate and warranted. Nongbri does well at highlighting issues with assigning the date of a manuscript solely on palaeography. He gives several examples from the past century of scholars attributing dates to manuscripts with little or no support from securely dated writing samples or instances of the same manuscripts being assigned widely differing dates. Christian apologists, theologians of every stripe, and historians of early Christianity should heed Nongbri’s warnings and apply an extra dose of caution and transparency when drawing conclusions or basing arguments on these early Christian books.
Posted by Timothy N. Mitchell at 2:51 PM