Paul's Preaching of God's Word and the Corinthian Community

In a recent issue of the Journal for the Study of the New Testament is published a new article which is freely available as Open Access.

In this paper I look at the publication and distribution practices of the first few centuries of the Christian era. I argue that because books were copied and circulated primarily through social networks in a community, this naturally created an environment where any macro-level changes to the text, literary theft, and plagiarism of these writings was exposed through these same social networks.
In the article I give examples of this phenomena from pagan and Christian sources. Some of the examples are taken from the New Testament. Though these examples from the New Testament discuss communities of Christians that are in a position to expose doctrinal corruption rather than being explicit references to revealing textual corruption.

One such example that I did not include in the article is found in the Christian Community of Corinth. Paul wrote to the Corinthian community concerning his ministry of preaching and teaching;

"Therefore, having this ministry by the mercy of God, we do not lose heart. But we have renounced disgraceful, underhanded ways. We refuse to practice cunning or to tamper with God's word, but by the open statement of the truth we would commend ourselves to everyone's conscience in the sight of God." (2 Corinthians 4:1-2; ESV)

Here Paul is declaring that he did not twist or "tamper" with God's word. They simply declared the truth and this was done "to everyone's conscience in the sight of God." Because he taught openly the word of God, the community could see for themselves that he was not twisting God's word.

Paul is here referring most likely to the "exegetical" or "interpretational" tampering of God's word and not to the physical tampering of their copies of the scriptures. This same community would be able, in the same way, to detect where Paul would tamper with the "text" if his ministry ever attempted to do so. 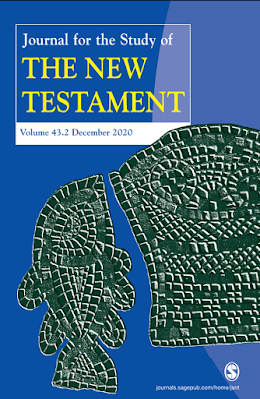 In the December issue of JSNT is a newly published article that I wrote on the publication and transmission of the New Testament writings in the first centuries of the Christian era.

The article is open access with both an online reading option and a downloadable pdf version. The link can be found here, 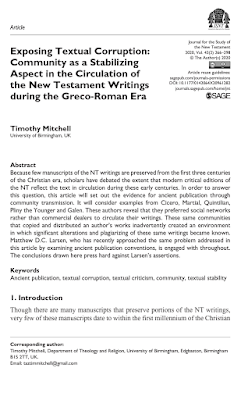 Posted by Timothy N. Mitchell at 9:34 AM No comments:

Review of Sabine R. Huebner. Papyri and the Social World of the New Testament 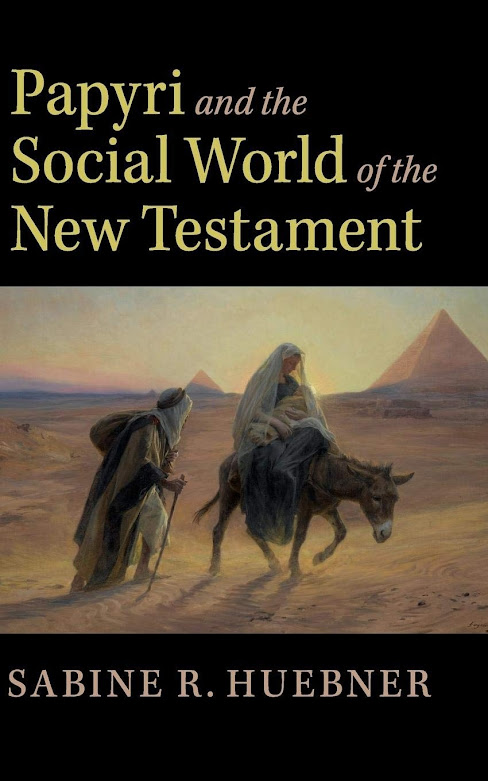 Though I have some criticisms of the book, mainly her view of early Christianity in Egypt, overall, the book is very good and is chock full of interesting insights. Especially refreshing is Huebner's treatment of the problems in the census of Luke 2:1-3 which are original and appear to satisfactorily reconcile the chronological problems of this census with other known imperial censuses mentioned in the ancient writings.

Posted by Timothy N. Mitchell at 4:32 PM No comments: 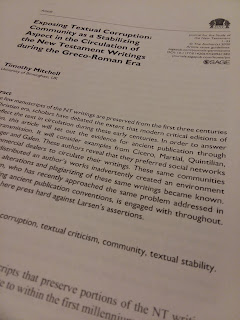 I just received the proofs from JSNT for my article, "Exposing Textual Corruption", which will be appearing in the December 2020 issue of Journal for the Study of the New Testament. Another exciting development about the article is that it is to be made available Open Access and thus it will not be behind any paywalls. 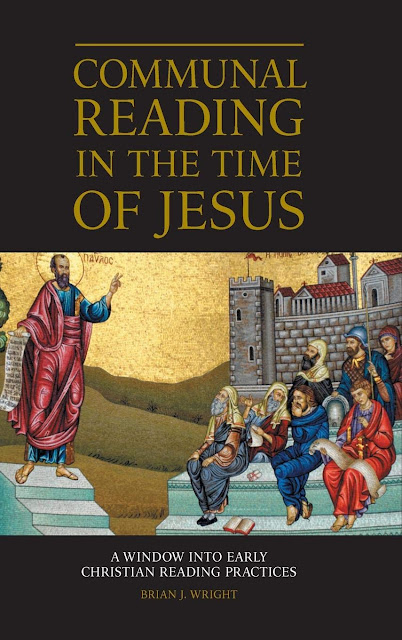 In Brian J. Wright's excellent book "Communial Reading in the Time of Jesus" he mentions an account found in Acts 19:11-20 that is set in Ephesus (p. 150-151). As many can recall, Paul was ministering in Ephesus, preaching the Gospel and performing many miracles and casting out demons. After a local group of Jewish excorists failed to excise a demon they were attacked and the excorcists fled (Acts 19:16). This sparked a huge revival as the populace began to denounce their magical practices and instead beleive in the Gospel message Paul was preaching. As a result of their coversion, Luke tells us,


"And a number of those who had practiced magic arts brought their books together and burned them in the sight of all. And they counted the value of them and found it came to fifty thousand pieces of silver. So the word of the Lord continued to increase and prevail mightily." (Acts 19:19-20; ESV) 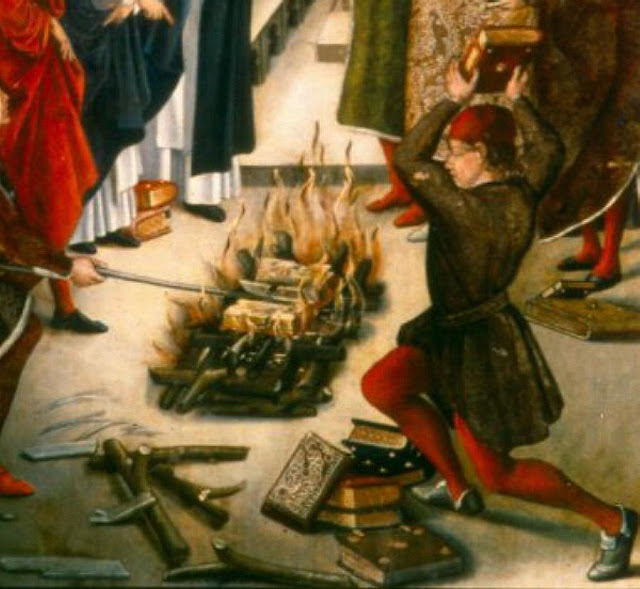 In this account, Wright teases out some interesting conclusions. He draws attention to the book burning event, that a significant number of books were burned (worth 50,000 silver coins), and that the burning of these magical texts was set in counter distinction with the the Gospel message in verse 20: "the word of the Lord continued to increase and prevail mightily" (ESV). Because of the book burning event recounted in v 19, Wright proposes that, "[t]he 'word of the Lord'  here probably refers to written texts and not merely to oral proclamation, in light of this explicit comparison" (p. 151).

If Wright's interpretation of this text is correct, it would imply that not just Old Testament texts are in view here, but more specifically written texts that include some type of Gospel proclamation. In light of the timing of the composition of Paul's epistles in the Acts narrative, if Wright is correct here, then Luke might include the idea of the circulation of some of Paul's epistles when he wrote that "the word of the Lord continued to increase" (19:20). To be clear, Wright is not specific as to what texts may be in circulation. Because the "word of the Lord" here is referring to the Gospel being spread as a result of Paul's ministry, I wonder if this verse might include the concept of some of Paul's epistles. According to the more common accepted timeline of the composition of Paul's epistles, at this time in the narrative, 1st and 2nd Thessalonians would likely have been written and dispatched, and possibly 1st Corinthians as well while Paul was at Ephesus. Paul at the very least may have begun the process of writing Romans during his three year stay in Ephesus (Acts 19:10; 20:31). The letter to the Galatians may have been written by this time in Acts as well. Therefore, since epistolary writing was a integral part of Paul's ministry, and this reference in Acts 19:20 is speaking specifically about the results of Paul's ministry, it may include the idea of widespread circulation of at least some of the Pauline epistles that had been written at this time and to their reading out to the Church communities as a means by which "the word of the Lord" increased. Especially considering the epistles would have been read out in the Churches as is mentioned in 1 Thess 5:27 (which was written before this time in Acts 19). Edit: I re-wrote the last segment to hopefully better express what ideas I am adding to Wright's proposal and to be more nuanced as to what "the word of the Lord" might be referring to more specifically.
_________________________________

Posted by Timothy N. Mitchell at 2:15 PM No comments:

Marcus Vitruvius Pollio (80-15 BCE) was a Roman architect and military engineer that lived during the fall of the Roman Republic and the beginning of the imperial era. He is best known for his work "On Architecture" which influenced many great writers and thinkers over the centuries. Vitruvius dedicated Book 6 of this work to the topic of planning a Roman Villa. In one section he discussed the importance of orienting certain rooms towards the sunlight.

"I shall now describe how the different sorts of buildings are placed as regards their aspects. Winter triclinia and baths are to face the winter west, because the afternoon light is wanted in them; and not less so because the setting sun casts its rays upon them, and but its heat warms the aspect towards the evening hours. Bed chambers and libraries should be towards the east, for their purposes require the morning light: in libraries the books are in this aspect preserved from decay; those that are towards the south and west are injured by the worm and by the damp, which the moist winds generate and nourish, and spreading the damp, make the books mouldy." (De Arch., 6.4.1)

It is notable that Vitruvius includes a "library" with all the rooms that make up an ideal Roman Villa.
The other interesting facet are the effects that solar heat, moisture, and airflow have upon the proper storage and preservation of the books. He indicates that libraries that face away from the morning sun (to the south and west) are in danger of becoming worm eaten and moldy, and decayed with moisture.
Though this is a passing statement by Vitruvius, I gather that it reflects an observed (and perhaps calculated) reality of the preservation and decay of books. Even when stored within a personal library (thus the owner would have vested interest its maintenance and preservation) books could still be subjected to decay and damage. This is not unlike the comments made by Galen that some of books he encountered in the Roman libraries were often in an almost unusable state due to decay and moisture (Peri Alupias 19)
These factors affected the longevity and useful life of books, even when stored within a personal library.
__________________

Posted by Timothy N. Mitchell at 9:27 AM No comments:

Quintilian on Writing Well and Quickly


While reading through Raffaella Cribiore's excellent work "Writing, Teachers, and Students in Graeco-Roman Egypt" I came across an interesting reference by Quintilian (ca. 35-100 CE) on the necessity of writing legibly. In his magnum opus, "The Institutes of Oratory" Quintilian was writing on the the art of educating and transforming a young boy into a rhetorician worthy of the Roman courts. In book one Quintilian writes about the necessity of teaching to write legibly.


"The art of writing well and quickly is not unimportant for our purpose, though it is generally disregarded by persons of quality. Writing is of the utmost importance in the study which we have under consideration and by its means alone can true and deeply rooted proficiency be obtained. But a sluggish pen delays our thoughts, while an unformed and illiterate hand cannot be deciphered, a circumstance which necessitates another wearisome task, namely the dictation of what we have written to a copyist. We shall therefore at all times and in all places, and above all when we are writing private letters to our friends, find a gratification in the thought that we have not neglected even this accomplishment." (Inst. Or. 1.1.28-29; )

There are a few elements of Quintilian's comments that relate to New Testament letter writing, in particular, Paul's use of a secretary to write his letters (see discussion here). It is fascinating that Quintilian makes the point that "writing well and quickly" is actually "disregarded by persons of quality"! Thus, the ability to write well was not a marker of high social status.
Despite this, Quintilian emphasizes the importance of clear writing, especially in personal letters, but not at the expense of an inordinate amount of time to write out one's thoughts. He notes especially that one may write out a letter in a less-than-legible hand, but then this eligibility requires the extra step of dictating this out to a copyist for better clarity in writing. Perhaps this is the case with Paul, for example, with regard to his letter to the Romans. He might have written it out himself and then, due to poor handwriting, dictated it out to Tertius (Rom. 16:22) for a more clear and practice hand. Of course this is pure speculation, but this possibility may be added to the list of reasons as to why the authors of the New Testament writings used secretaries and copyists. Also, their inability to write legibly would not have been a marker of low social status.
_________________________